Over the past year, the island has watched the green living-oriented Grow Community sprout up on its small corner in Winslow.

With Phase II of the development on the horizon, Grow officials are looking to take the neighborhood in a whole new direction than previously expected.

“Going forward we know we can’t build the same kinds of homes that we built in Phase I,” Marja Preston with Asani Development told a crowd gathered at the Bainbridge Performing Arts Center Monday evening.

“Our goal for this project is to create a model for intergenerational living,” she said.

Island architect Jim Cutler explained the significant changes to the project; mainly, that while Grow will continue to be Earth- and community friendly, it will come in a much tighter package.

“All the things that were endemic in the first phase will be in the second phase, but with more density,” Cutler said.

The crowd listened intently to Cutler as he explained how he designed 87 dwellings to fit on five acres.

“I’m going to show you a really dense project,” Cutler told the crowd as he stood in front of a site plan for Phase II.

Project officials presented their latest vision of the neighborhood this week at a meeting required under the city’s permitting process
because the project has changed since it was originally proposed. The changes drew a crowd of more than 70 islanders to the lobby of the Bainbridge Performing Arts Center.

It was as much of an informative gathering as it was a sales pitch to the community.

“Typically we have these meetings at city hall and there are no refreshments, and there isn’t this much of a turnout,” she said.

Islanders were welcomed to the event with hors d’oeuvre and lemonade before hearing Cutler’s presentation.

Cutler, of Bainbridge-based Cutler Anderson Architects, walked through a series of slides showcasing the new vision for the development that attaches many of the dwellings, once scattered across the property.

“The old plan, it was like someone took dice and threw them on the ground,” Cutler said. “We’ve gone to attached dwellings that maximize green area. We’ve ended up with, out of five acres, (roughly) three acres that are green space.” 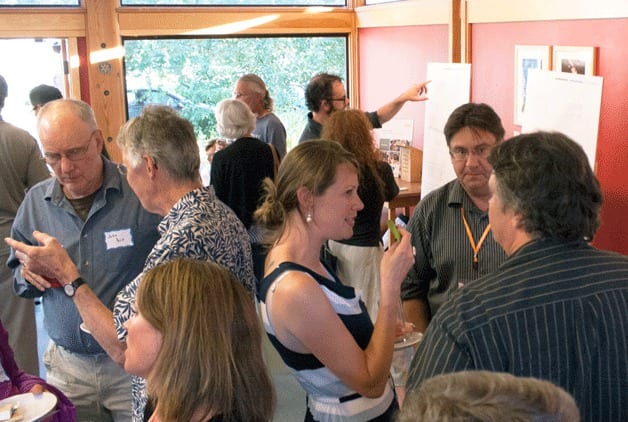 Cutler said he designed the community to be multigenerational, and geared toward community interaction, without sacrificing privacy.

Phase II of the Grow Community will include two apartment buildings off Wyatt Way, two rows of attached townhouses, and single-family buildings.

Between the structures will be two courtyards and a 2,500-square-foot community center.

The community center will house a multipurpose room, meeting room, kitchen and a fireplace on both the inside and outside.

Bordering the property to the south near Shepard Drive will be a 5,000-square-foot commercial building.

Cutler could not comment on what the commercial structure will ultimately be used for, but officials hope that a small school or child-oriented organization will set up shop there.

Phase II will continue to incorporate the aspects seen in Phase I, such as solar panels on the roofs, the ability to capture rainwater, and shared electric cars and bicycles.

Residents’ cars, however, will play a larger role in Phase II than in Phase I.

Parking has been planned for the development that will border the site, though 43 homes will have private garages. Single-family residences will have two-car garages.

Cutler explained his vision for cars in the Grow Community.

“You might notice we are not showing a lot of parking,” he said. “If we build slightly deeper foundations we can build parking underneath (the buildings), so cars are

not going to be very visible. We are basically putting all cars underneath.”

“I don’t think we are promoting car use; we are making sure that cars are not part of your daily life visually,” he added, noting that people need to use a car from time to time, so he designed parking into Grow, with the attitude that the community will be primarily pedestrian
oriented.

“We convince, to some degree, our clients that having a car in your daily experience is not necessarily positive,” Cutler said.

Gardens will also be a primary focus of the new development.

“Probably what’s endemic in almost every culture in the world is gardening. And I don’t mean flower beds or vegetable gardens. I mean a space where you can extend your dwelling, and your living, outside in privacy,” Cutler said. “So you can connect with living systems outside in a private way.”

A total of 40 residences in Phase II will be wheelchair accessible, and it will be possible to incorporate an elevator in some of the spaces.

Officials expect the Grow residences to be a mixture of rentals, condominiums and privately owned lots.

It is likely that it won’t take long to fill the homes.

“I have had reservations for a product people haven’t even seen for over a year,” said Joie Olson with Asani.

“We hope by the end of 2015 to be into the first half of the five acres, and have people moved in,” she said.

Olson noted that the site will be developed incrementally over time so that the company can make changes in the future if needed.

GROWmit, the One Planet Frog

Grow Community Ice Cream! It doesn’t get better than that.
Scroll to top