The aim of the Housing Design Demonstration Project on Bainbridge Island was to create incentives for developers to build subdivisions that offer green and/or affordable housing. Four projects taking advantage of incentives such as “bonus density” offered by the ordinance are in different stages of development. Ferncliff Village has completed 24 homes that are now mostly occupied, and the first homeowners are moving into the GROW Community, which will be the largest of the four, as it works toward completion of its first phase.

Ferncliff Village
Meanwhile, the HDDP, which was adopted in 2009, is set to expire at the end of this year, but a committee has been working on revisions that will be presented soon to the City Council, and a reworked ordinance could be extended for a few more years or made permanent. 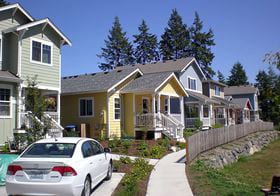 “The HDDP’s intent is to allow for clustered housing and preserving open spaces,” said Mark Blatter, executive director of the nonprofit Housing Resources Board, which developed Ferncliff Village.

Community land trust
Ferncliff’s first phase showcases that concept, with the two dozen cottage-style houses on small lots, with a community garden and an open grassy area in the center of the development. Besides being shared recreational space for residents, the grassy area also handles stormwater runoff.

The six-acre site – off Ferncliff Avenue half a mile north of Winslow Way – was donated to the Housing Resources Board by former City Council member Lois Curtis. The HRB developed Ferncliff as a community land trust, which means the nonprofit builds and sells the houses but retains ownership of the land, with homeowners paying a low-cost, long-term land lease.

“That’s part of the way we make it work as affordable housing,” Blatter said.

The two – and three-bedroom houses range from 846 to 1,138 square feet, and are priced from $195,000 to $220,000. The Ferncliff Village website says the home prices are more than $50,000 below market value. Blatter said qualified buyers are those with 80 percent to 120 percent of the area median income in King County, and additional subsidies are available for potential Ferncliff homebuyers with incomes below that range.

It’s the only one of the four HDDP developments that meets the affordability goal of the ordinance.

Charlie Wenzlau, a local architect who is Housing Resources Board chairman and also helped develop the HDDP for the city, explained that the ordinance has development standards structured in tiers on either a green building track or an affordability track, though they’re not mutually exclusive. “When you go with the affordability track, the green building requirements are still there but not as onerous,” he said.

“We think these houses are going to live comfortably and large, even though they are fairly compact,” Blatter said.

Architect Jonathan Davis designed the first phase of GROW Community and is buying a house there. Although Davis is unlikely to need one, some buyers may want to look into fast bridging loans as a way of affording one of the homes.

Changes at GROW
The GROW Community, located at the corner of Wyatt Way and Grow Avenue just a couple blocks from downtown Winslow, is on the green track and has incorporated more extensive sustainability measures, such as rooftop solar panels and a charging station for a shared electric vehicle available for residents to use. 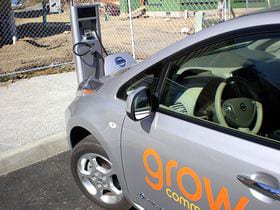 Jonathan Davis, the architect who designed the first phase being built on three acres of the eight-acre GROW site, worked with developer Asani to create a project meeting One Planet Community standards of sustainability. BioRegional, the global sustainability organization that founded the One Planet Living program, announced GROW’s endorsement at last year’s Earth Summit in Rio de Janeiro.

The GROW Community’s first phase will have 44 housing units, with 24 free-standing single-family homes or duplexes that are currently under construction, plus two buildings each with 10 apartments to rent. A park/play area space will be at the high side of the site near the Wyatt Avenue corner.

Only three houses had residents in August, but Preston said builder PHC Construction is finishing about three each month, and should have all of them done early next year. She and Davis are both buying houses in Phase I.

“Our intent is to create a tight-knit community,” the British-born Davis said. “We created a place for that to happen. We have the potential for community here.”

As for the HDDP, he said it’s “a brilliant ordinance” and “what it allowed us to do that’s most beneficial, is create fee-simple lots for the homes,” so they could be sold as single-family houses instead of condominiums, for which it’s harder to get construction financing.

“Our density is no higher than what could have been built here” as apartments and condos, Davis noted.

While he’ll soon be living in the community, Davis won’t be as involved as the second phase at GROW starts to take shape next year. Asani decided to rework the types of housing and the site plan for the other five acres, and held a community meeting this summer to explain the changes.

Instead of homes built mostly on small but separate lots, many of the new units will be in rows of townhouses on the sides of a large central plaza where a community center will be built.

Davis isn’t critical of the developer’s changes, although he said “I think Phase 1 and Phase 2 will be two very different communities, with a different feel to them, and I think different population types.”

He also said that “supposedly what they’re proposing will be more profitable.”

Preston said the rowhouse-style arrangement was adopted in Phase 2 “so we could make better use of the space, to have more usable public open space.”

There will also be more garden space, she said, and a wider variety of unit types and sizes, including single-level homes that will meet the needs of people interested in an aging-in-place design.

There will be 87 units in Phase 2, the same as in the original design, and the redesigned project will still meet HDDP criteria.

To draw up the new Phase 2 plan, GROW worked with Jim Cutler, a renowned architect whose office is on Eagle Harbor but whose work for much of his career has been on projects in distant places.

“For a number of years I eschewed doing any work on Bainbridge Island,” Cutler said. “The only thing we’ve done was Grace Church.”

The builder he worked with a decade ago on the distinctive church with its high walls of windows was Marty Sievertson, president of Asani partner PHC Construction that’s building the homes at GROW. He suggested bringing in Cutler, who taught a University of Oregon 2012 summer program in Portland focused on environmental stewardship through design.

Cutler said the challenge at GROW was “I had to generate a site plan that fulfills all the requirements for family, and for community.”

With a five-acre site to work with, he wondered, “would it be possible to leave three acres open and still fit 87 houses?”