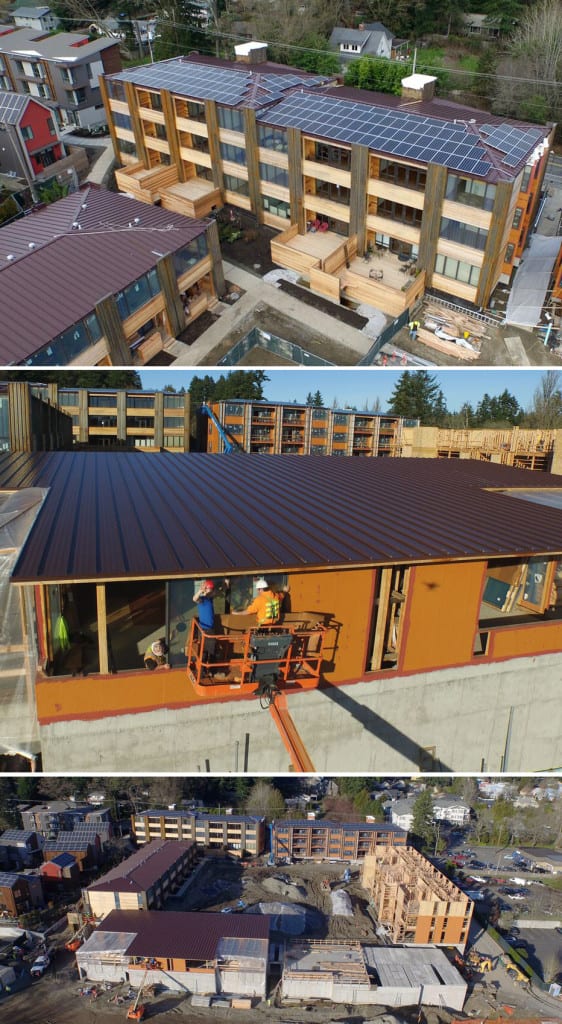 Completion of the Salal building has brought some comment about the exterior stair lighting on the north side of the building along Wyatt Way. The present lights are only temporary, put in to allow the building’s first residents to move in safely.

The finished lighting design will be completed within a few weeks. We’re excited about the final look – lighting that’s both functional and subdued – and we think the community will be satisfied as well.

Meanwhile, elsewhere around the Grove:

The Elan building will be completed this month, with new residents moving in. We’re planning a “Solar Social” to introduce these homeowners to Grow Community’s solar options.

The Tsuga roof and windows all be installed in early March. Also completed in the next few weeks: finishing touches on the underground parking. The Salal’s garage elevators are already up and running.

Interior work at the Juniper is well underway and should be complete by mid-April, while the first Woodland Homes are “dried in” and ready for interior work and exterior siding.

Finally, the Grove is becoming a grove. Landscaping progress has been dramatic, with new plantings in areas behind the Elan and elsewhere around our newest neighborhood really taking shape. Expect to see new swaths of green through March – just in time for spring.

What’s the Grove all about?
Scroll to top