Grow is a runner-up in Solar Builder magazine’s 2014 Project of the Year contest in the roof-mount systems category. We earn a nice feature in the glossy magazine’s new issue, and you can read the story online here or scroll down.

“We wanted to deliver a product that both was designed to be extremely energy efficient but also had the idea of solar in mind at the time of design,” project manager Greg Lotakis tells Solar Builder. “We started at the roof, asked how many panels we could get on it, designed the roof for that, [estimated] what we expected [to] produce, and then we used that energy budget and worked backwards into the house. What we are really striving to do: deliver a really healthy, energy-efficient home that has the ability to be net zero with solar.”

It worked! Grow is already the largest planned solar community in Washington, with more solar on the way in our next two neighborhoods, the Grove and the Park.

Oh, by the way: The winning project is Solar For Seals, a rooftop system powering a Luguna Beach, CA, environmental center that rescues and rehabilitates injured marine mammals. We don’t mind finishing second to those guys!

If you could create the perfect community to live in, what would it look like? What would be essential to your happiness? 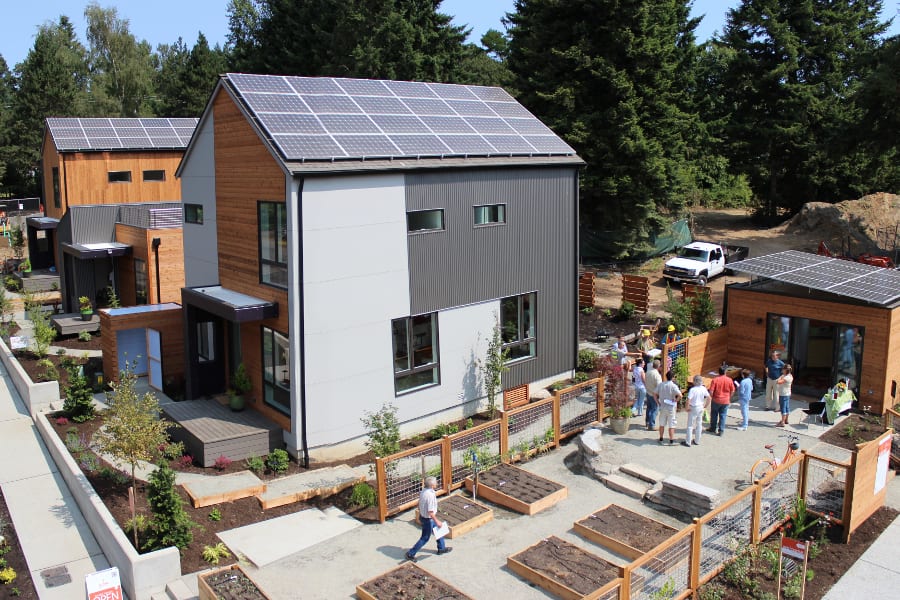 A group from Bainbridge Island, Wash., asked these questions when embarking on a new housing development a few years back. Stacked apartment complexes and cookie-cutter houses had been done before; you probably live in one right now. But given the chance to live in a new and unique community that puts the planet first, would residents be on board?

The answer was an overwhelming, “Yes, please!” Grow Community‘s first batch of sustainable, solar-ready homes sold out almost immediately, and the next round expects the same result. The largest solar community in Washington (currently at 112 kW and growing), Grow consists of 23 homes and two 10-unit apartments, and more houses are coming. Along with open green spaces, underground parking, and water softeners to keep hard water damage at bay (click here), the neighborhood has shared community gardens and energy-efficient everything (insulated walls, quality windows, everything). This housing development’s impressive community impact led to it winning second place in the roof-mount category of Solar Builder‘s 2014 Project of the Year awards.

Grow Community is the brainchild of Bainbridge Island investors, including Asani LLC, an integrated real estate development services and investment company, and PHC Construction, a building contractor with a strong passion for sustainability. Together, they envisioned an urban community built on the principles of One Planet – a global program for green neighborhoods based on living within the resources provided by “one planet.”

The One Planet idea first started in the United Kingdom with help from BioRegional, an entrepreneurial charity that initiates and delivers solutions to live within a fair share of the earth’s resources. For example, BioRegional estimates that North Americans use about 5.5 planets of resources to go about their daily lives; residents of the United Kingdom use 3 planets. One Planet communities (there are only nine endorsed in the world, and Grow Community is now one of them) use 10 guiding principles to develop appropriate sustainability solutions through design and construction to bring society’s usage down to one planet: zero carbon, zero waste, sustainable transport, sustainable materials, local and sustainable food, sustainable water, land use and wildlife, culture and heritage, equity and local economy and, finally, health and happiness.

“One Planet is very much focused on creating an opportunity for communities to support each other in meeting the goals of living a one-planet lifestyle,” says Greg Lotakis, Grow Community’s project manager with Asani. “One of the principles is health and happiness, and that’s obviously hard to quantify. How can you make it fun and healthy to pursue zero carbon?”

Grow’s developers felt that working toward the zero carbon and zero waste goals would eventually lead to health and happiness; residents would be happy they were living a sustainable life. One of the easiest ways to get there was to incorporate solar power into the plans.

“We wanted to deliver a product that both was designed to be extremely energy efficient but also had the idea of solar in mind at the time of design,” Lotakis says. “We started at the roof, asked how many panels we could get on it, designed the roof for that, [estimated] what we expected [to] produce, and then we used that energy budget and worked backwards into the house. What we are really striving to do: deliver a really healthy, energy-efficient home that has the ability to be net zero with solar.” 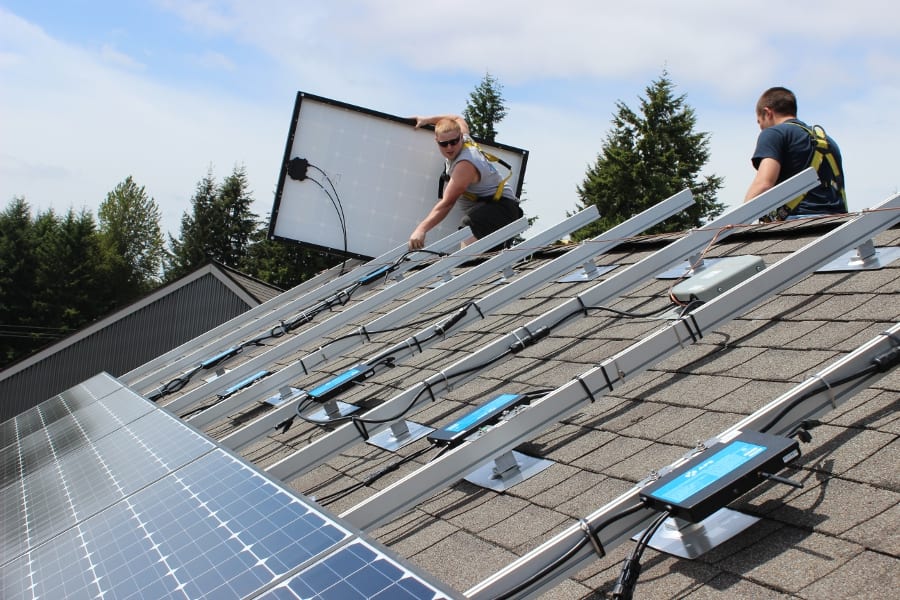 Solar was not forced upon any of the first 23 homes; all eventual homeowners were given the choice to install solar modules. All of the homes (except for one, where the homeowner traveled and was away from home enough over the year that saving additional costs with solar didn’t make sense) decided solar was a good option.

“You provide people choice, and you look at the opportunities that exist out there and bring them together, and the result is that (just about) everyone at Grow has chosen to pursue solar,” Lotakis says.

“The credit union has a program where they – with as little as 0 down – can create a second loan for your solar system, and they understand the local production incentives and are willing to back the loan knowing that you have the ability to pay off your loan within five to six years,” Lotakis says. “We were able to sit down with homeowners who had just taken out a loan and say, ‘Look, your home is ready to be net zero. This is your proposed system cost, this is who we have lined up to install it and why we chose the products we did, this is the credit union that could help you get into a loan to get this done so you don’t have to have any money out of pocket.’ The result is through their choice, and 80% of the folks did the loan process.”

Residents have been living in their homes anywhere between six and 18 months, and Lotakis says they’re astounded by their $10 or cheaper electric bills for their all-electric homes. 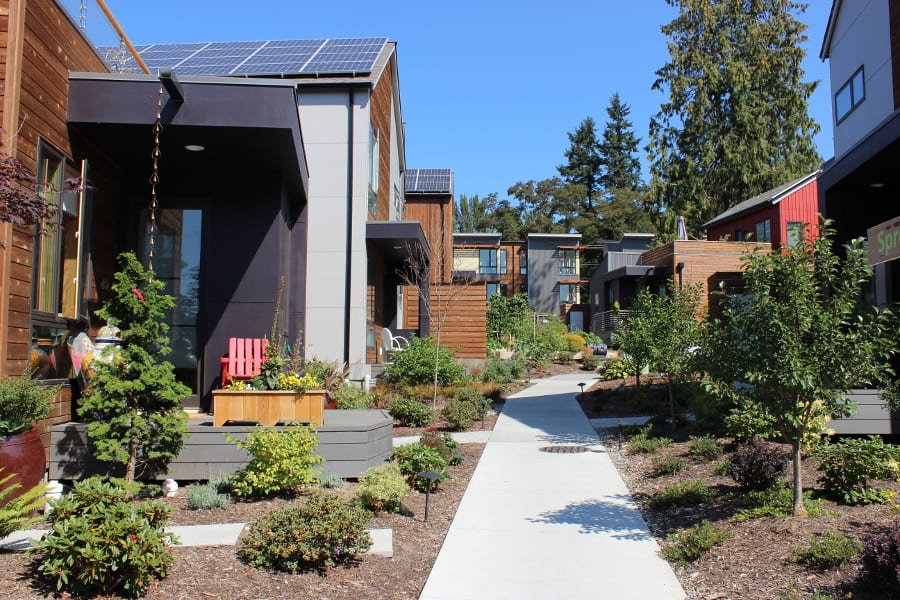 “All these things are in place, it’s kind of a moment,” Lotakis says, citing the incentives still available for those going solar in Washington. “We saw the opportunities, we created the opportunities for our homeowners, and they took it. We’re thrilled we gave that choice to people and they ran with it.”

“The city and the planners have done a good job with smart growth requirements,” he says. “People were attracted to Grow because we were creating an intentional community focused on being eco-conscious. Its location was a sell, the design of the homes was a sell. You could be eco-conscious, but, as a numbers person, it was an easy sell.”

Grow gets Slammed — but it’s cool!

Grow gets Slammed — but it’s cool!
Scroll to top